A three month exchange program in Italy too short for Sean

For Sean, three months in Italy was not quite enough time to enjoy the sights and sounds of Bosa.  Sean extended his trip so he could enjoy the celebrations for Carnevale.    Sean was one of thousands of people dressed in black, whilst screaming, laughing and enjoying the most important day of Carnevale.

In his blog he reports on his stay in the town of Bosa and the emotions he is feeling as he plans for his return trip back to Australia. 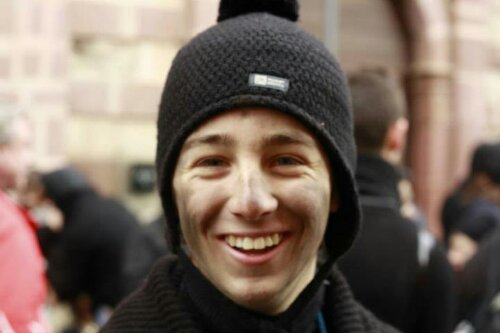 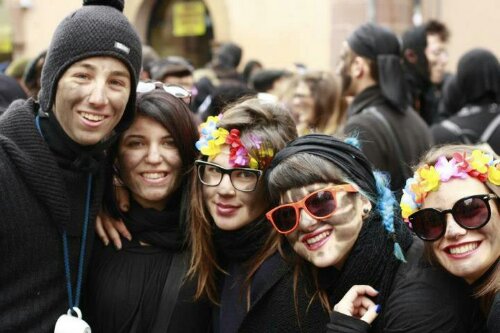 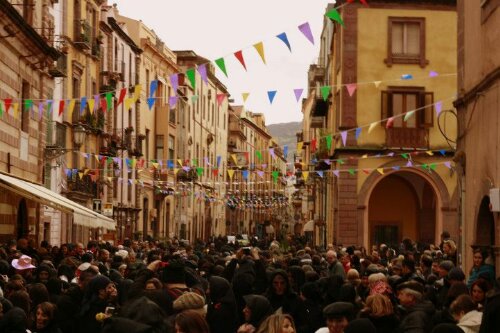 What a crazy few days.  Finally Carnevale started on Thursday and although I didn’t know what to expect I was completely and utterly surprised by everything.  Thursday started off slowly and as it rained there wasn’t much we could do in the morning.  As the rain died off I got my first little taste of Carnevale in Bosa.  There were some interesting sights to see as everyone dressed up from classic Italian outfits to modern day superheroes to farm animals.  Because it rained Thursday the following day ended up being what Thursday should have been.  Thankfully it was a beautiful day.  As the day before everyone dressed up again and me and my mates decided to go formal for the day .  There was a small parade along the main road in the morning with all the kids and adults getting involved.

After lunch I headed off to one of the many ‘piazzas’ in Bosa.  There we found this van with speakers, DJ deck’s and of course a few DJ’s in the car pumping out music for all of us.  As the van slowly started to drive away we all followed dancing to the music.  I sort of lost track of time but we followed this van for a good few hours having an absolute ball.  At one stage I even jumped on to the back of the van with one of my good mates dancing as the van did laps of the main piazza in Bosa.  The van finally stopped for good in the piazza and for the rest of the night we all danced to the music having a great time.  Unfortunately it started to rain at night and slowly everyone started to go home.  I was told this day is the most tame of Carnevale but for me it was crazy.  And it was only going to get more crazy the following day, “Sabato della Cantina”.

On Saturday I headed off to school for my last full day.  With the festivities continuing at night most of us went to school after a few days off.  It was weird thinking that I won’t be coming back to this school again, to my class mates who have meant so much to me over the past three months.  School ended and I walked home for the last time.

So the Saturday night of Carnevale is something that a lot of people had told me out.  It’s different to the Thursday (or this year the Friday) of Carnevale as it is held all at night and into the early hours of Sunday morning.  Unlike the past few nights it all started off pretty slowly.  People didn’t start going out till about nine or ten at night.  But when everyone had gathered in yet another ‘piazza’ and the DJ’s started playing the music, it went off.  As the past few days everyone was dressed up again dancing to the music through the night.  This night was also held in the old part of Bosa.  As I walked through this part with mates all I saw were people dressed up in all kinds of weird outfits and of course drinking wine.  There were some hilarious sights to be seen.  As the music finally stopped at two in the morning I returned home.  This night was one of the strangest but coolest nights of my life and something I will never forget.

I now have less than a week here in Bosa.  There are still a couple more days of Carnevale before I start to say my goodbyes.  Now I am actually looking forward to going home to my family and friends but not without a big finish off here in Bosa and I’ve been told that the Tuesday of Carnevale is going to be the craziest day yet. 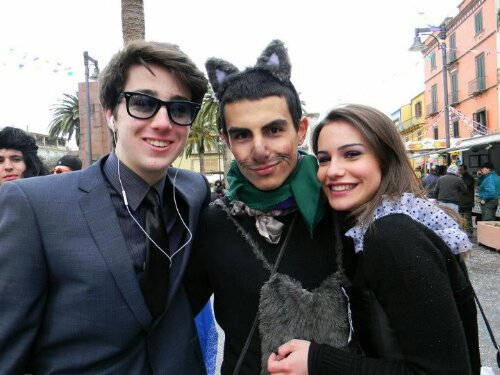 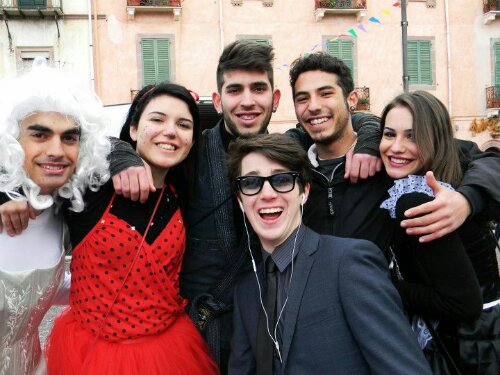 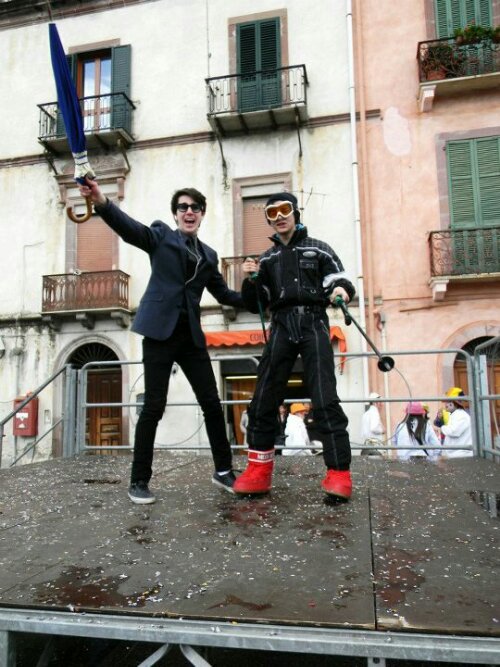 CARNEVALE, MOTORCROSS AND MUCH MORE!

We are getting towards the business end of my stay in Italy but there is more happening now then ever before.  With Carnevale starting last Thursday the excitement around Bosa is building for this week.

So last Thursday was the official start of Carnevale in Bosa. I was told that this was the least exciting day but even so I was completely surprised at what I saw. First thing in the morning my host brother and I were up and getting ready. Everyone dressed up and were out and about at nine in the morning. As is tradition we painted our faces black by burning a cork. I looked at myself in the mirror and just thought how did this happen. I’m here in Italy painting my face black for Carnevale. I seriously felt so lucky to be able to experience this with everyone that I’ve become so close to during the last two and a half months. So as we went out in town with mates I got a taste of what Carnevale would be like. Everyone was screaming and shouting, singing, dancing, drinking and at only ten in the morning! Everyone was having a good time and some things that I saw were just hilarious. Last Thursday got me excited for this Thursday when the festivities continue at Bosa for Carnevale.

The weekend then arrived and unfortunately the winter caught up to me and I got sick. But I wasn’t going to stay at home with less than two weeks left here in Italy so as usual I went out with mates on Saturday night. After getting home after midnight we were all up early for another busy Sunday. My host father, brother and I headed off to the best motorcross venue in Europe to watch motorcross riders from around the world. Although the sound of the bikes was killing me we had a great time. We saw a world champion rider (of course an Italian) and every time he rode around the crowd would go crazy for this bloke. And he was crazy. He went around the track so quickly and easily, obviously finishing first. We left after a few hours and made our way to where my host mother, grandmother and aunt were spending the day. It was a hotel which had these naturally heated pools. After seeing pictures of my family in the pool this summer I was hanging out for a swim and these pools were beautiful. On a chilly winter day a dip in this pool went down very well!

After a crazy weekend we are now getting ready for an even busier few days. This Thursday, Saturday and then the following Tuesday make up the days for Carnevale in Bosa and what better way to end my stay here in Bosa then with one huge party. If last Thursday was anything to go by I’m sure I will have a fantastic week. 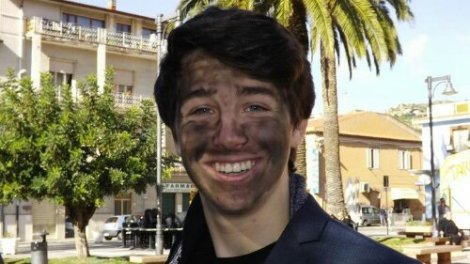 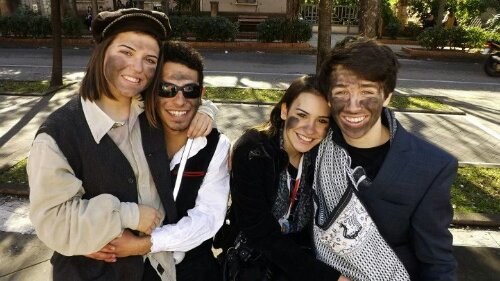 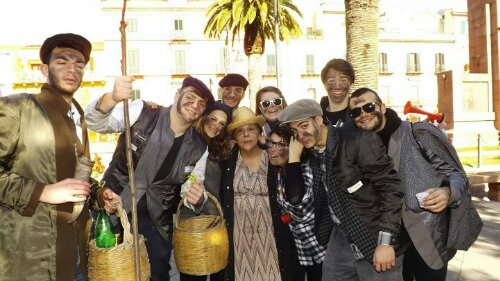 REFLECTING ON MY TIME HERE

With about three weeks to go here in Italy I have started to look back on my time here and everything that I’ve done and achieved. At first it wasn’t easy being without my family and friends but as I got to know my family and made friends I settled in well and have enjoyed the rest of my time here. It’s not easy settling into a new lifestyle and culture. Here are three things that helped me settle into my new life in Italy.

1. Starting school. Within three days of being in Italy I started school. Those three days before school started I felt isolated from everything as I hadn’t met many people so starting school was important for me. After the first day I knew I was going to be fine in Italy. I met a whole bunch of people and after meeting a guy in my class who spoke a bit of English I felt right at home. Although I’m not expected to do much at school, every day I enjoy going and get to see so many awesome people that I’m grateful for meeting. These guys have helped me settle into school and Bosa and some of them I’m sure I will be friends with for a long time.

2. Speaking, not just listening. Getting the confidence to speak more and more Italian is something that I’m still getting better at. When I started to get the confidence to speak and make those mistakes I started to feel better about myself. Not only has speaking more obviously helped improve my Italian but I started to feel like I belonged more. It also felt good to be speaking in a different language. After studying Italian for more than four years, growing up hearing Italian at my grandparent’s house, I felt like I had achieved something by speaking Italian to my Italian family and friends. In a way I felt like I was doing my grandparents proud by speaking Italian and when I finally return back in Melbourne I’m sure I will be able to have a conversation with my nonna and nonno in Italian.

3. Once I had the confidence to talk in Italian to my family and friends I then had to get used to talking to new people that I met. This was harder for me because as I got to know my family and friends more I felt comfortable speaking to them. When I met someone for the first time or had to go order a coffee at the bar I got nervous. Once I ordered something for the first time or asked a teacher at school something I then had the confidence to speak to other people too, not just the people that I have gotten to know so well. Talking to other people that I’m not familiar with is something that I’m still getting used too and it does put me out of my comfort zone. Coming here in the first place put me out of my comfort zone and as the time has gone by I’ve learnt a lot and become more comfortable with living here.

These three things have all made my stay here a lot easier. From school starting I met new people and friends that I feel I will have for life. When I started talking to my friends and family I began to learn so much and then from that I was able to start talking to people that I didn’t know so well. With three weeks to go I’m sure I will learn a lot more before heading back to Australia. 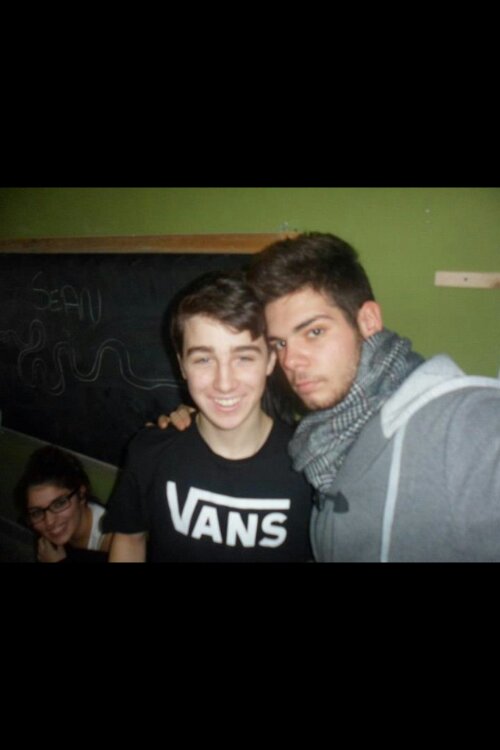 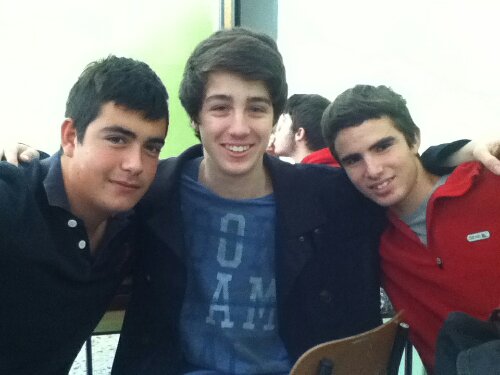 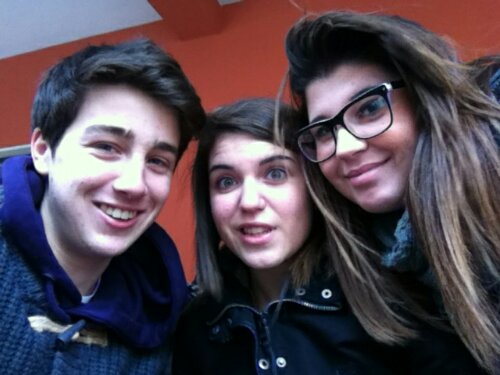 Click here to read more about Sean's exchange to Italy, in his blog.

Posted 8 years ago by Cara 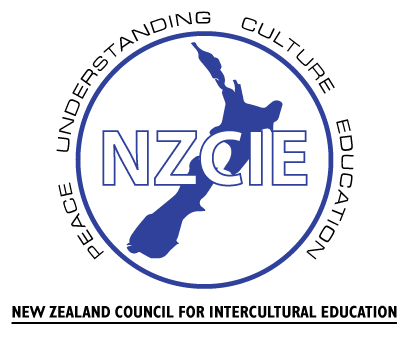